"I have a dream". Four words, the name of a speech, a heady stylistic device in the quest for freedom for which Martin Luther King fought all his life. Activist, pastor, politician, philosopher, poet, the actions and missions that MLK gave himself were as rich and varied as his commitments. Neither his life nor his fights could be summarized in one article. In these few lines you will find a tribute to the story of a man who dreamed of peace and equality.

Born in Atlanta in 1929, Martin Luther King militated all his life against injustice and discrimination. His long and tumultuous battle punctuated by numerous non-violent actions began when he took the lead in the movement in support of Rosa Parks, arrested by the police for refusing to give up her seat on a bus to a white man. In protest, MLK launched a call for a boycott of the bus company, which lasted one year until the trial of the transport company.

"We must learn to live together as brothers, otherwise we will all die together like idiots" 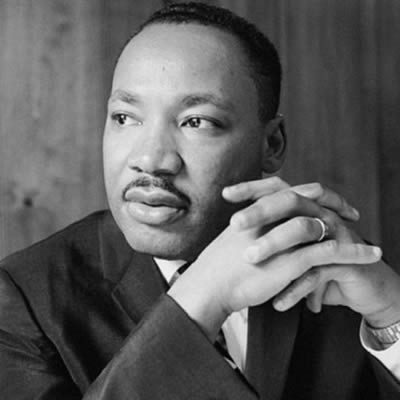 Inspired by Thoreau and an admirer of Gandhi, MLK advocated non-violence all his life, even when he was repeatedly arrested. At the head of great campaigns for civil rights and the end of segregation, the strength of his actions lay in their public impact. Words as a battle weapon, and the spirit of cohesion as a source of power allowed MLK to become the youngest winner of the Nobel Peace Prize in 1964, before his murder 4 years later during a trip to Tennessee, to support the strike of the local black garbage collectors.

The legacy of this struggle lives on today. It is celebrated each year in the United States on Martin Luther King Day, a holiday on the third Monday in January, around the 15th, Reverend King's birthday. A day that reminds us that while MLK's dream is far from over, his positive thinking remains an inspiring ode to solidarity years after he spoke these words: "Hate clouds life, love makes it harmonious. Hate darkens life, love makes it bright."

Illustrated with a mugshot of MLK, our eponymous edition pays tribute to a man and his unwavering convictions, symbolizing the importance of believing in one's dreams and ideas in a context where the quest for equality can lead to prison.